When autocomplete results are available use up and down arrows to review and enter to select.
HTMLPageTitle
Lake Shore cryogenic probe stations now include a PC with MeasureLINK™ software
Intuitive software enables advanced control over temperature settings and measurement sequences 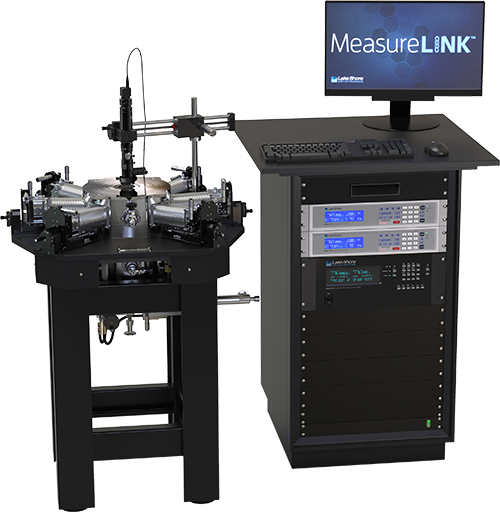 The versatile software, which comes preloaded on the Windows® PC and features drag-and-drop control and an intuitive GUI, enables users to easily control sample temperature, as well as magnetic field on probe station models that support it, for on-wafer probing measurements performed in a station.

Users, for instance, can set up either discrete or continuously varying temperature measurements in a station equipped with CVT probes and watch how temperature stabilizes while reaching a set control temperature. A process view window in MeasureLINK displays a view of station internals at different points, so users have a better understanding of internal temperature variations, including the temperature at the sample stage and on the probe arm (as well as at other internal points, depending on the probe station model).

MeasureLINK also offers real-time data collection visualization and allows one to create a multi-variable chart for any data-collection sequence. A chart recorder utility enables monitoring of certain variables, such as temperature trends, in real-time, allowing a researcher to confirm that an experiment is progressing as intended, so they are not wasting time.

In addition, the software can be used to control the collection of electrical measurements as a function of temperature or magnetic field utilizing Lake Shore’s MeasureReady® instruments and some third-party instruments. “This is a real plus for researchers who are trying to unify control over various components used in the lab,” said Rachael Floyd, Lake Shore Director of Product Management for Cryogenic Systems. “There’s no need to write custom code so different instruments can communicate with one another. MeasureLINK does that for you, without requiring programming.”

Currently, researchers can use the Lake Shore MeasureReady M81-SSM synchronous source measure system to provide excitation for on-wafer electrical probing in their Lake Shore probe station, with MeasureLINK coordinating all measurement sequences. But this is just a start, according to Floyd. “We are continually refining the software to support its use with more products in the lab along with developing more tools and app packs to aid in probe station-based research.”

Cryogenic probe stations benefit early-stage material or device research requiring fundamental I-V, C-V, and other measurements of test structures. In these applications, there is often a need for non-destructive measurements as a function of low temperature as well as magnetic field within a controlled environment. Lake Shore probe stations provide this level of control, and the company offers both liquid cryogen and cryogen-free versions, with configurations available for measuring magneto-transport, electrical, electro-optical, parametric, high Z, DC, RF, and microwave properties at temperatures as low as 1.6 K and in fields to more than 2 T.