When autocomplete results are available use up and down arrows to review and enter to select.
Home > Products > Temperature products > Cryogenic Temperature Monitors

More about the Model 218

The Model 218 has eight constant current sources (one for each input) that can be configured for a variety of sensors. The inputs can be configured from the front panel or via a computer interface, and are grouped in two sets of four. Each set of four inputs is configured for the same sensor type (i.e., all 100 W platinum or all silicon diodes).

Two high-resolution A/D converters increase the update rate of the Model 218. It can read sensor inputs more quickly than other scanning monitors because it does not have to wait for current source switching. The result is 16 new readings per second, allowing all inputs to be read twice each second. Inputs can be turned off to obtain a higher reading rate on fewer sensors.

The Model 218 has standard temperature sensor response curves for silicon diodes and platinum RTDs. It can support a wide variety of temperature sensors because a unique 200-point user curve can be stored for each of the eight inputs. CalCurves™ for Lake Shore calibrated sensors can be stored as user curves. The built in SoftCal™1 algorithm can also be used to generate improved curves for DT-470 diodes and platinum RTDs that are stored as user curves.

1 The Lake Shore SoftCal™ algorithm for silicon diode and platinum RTD sensors is a good solution for applications requiring more accuracy than a standard sensor curve but not in need of traditional calibration. SoftCal uses the predictability of a standard curve to improve the accuracy of an individual sensor around a few known temperature reference points.

The Model 218 is available with both parallel (IEEE-488, 218S only) and serial (RS-232C) computer interfaces. Each input has a high and low alarm which offer latching and non-latching operation. The eight relays on the Model 218S can be used with the alarms to alert the operator of a fault condition or perform simple on-off control. The Model 218S includes two analog voltage outputs. The user may select the scale and data sent to the output, including temperature, sensor units, or linear equation results. Under manual control, the analog voltage output can also serve as a voltage source for other applications.

The eight display locations on the Model 218 are user configurable. Sources for readout data are temperature units, sensor units, and results of the math function. Input number and data source are always displayed for convenience. The display is updated twice each second. 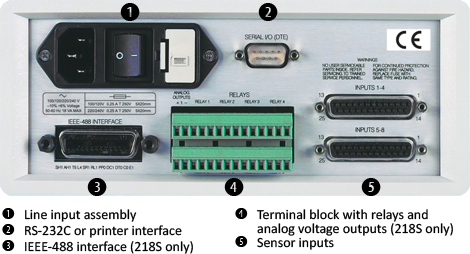