More about the Model 331

The Model 331 cryogenic temperature controller is designed for high performance over a wide operating temperature range and in difficult sensing conditions. The Model 331 features two inputs, with a high-resolution 24-bit analog-to-digital converter and separate current source for each input. Sensors are optically isolated from other instrument functions for quiet and repeatable sensor measurements. Sensor data from each input can be read up to ten times per second, with display updates twice each second. The Model 331 uses current reversal to eliminate thermal EMF errors in resistance sensors.

Standard temperature response curves for silicon diodes, platinum RTDs, and many thermocouples are included. Up to twenty 200-point CalCurves™ for Lake Shore calibrated sensors or user curves can be loaded into non-volatile memory via a computer interface or the instrument front panel. A built-in SoftCal™1 algorithm can also be used to generate curves for silicon diodes and platinum RTDs, for storage as user curves.

Sensor inputs for both versions of the Model 331 are pre-configured and compatible with either diode/RTDs or thermocouple sensors. The purchaser’s choice of two diode/RTD inputs, one diode/RTD input and one thermocouple input, or two thermocouple inputs must be specified at time of order and cannot be reconfigured in the field. Software selects appropriate excitation current and signal gain levels when sensor type is entered via the instrument front panel.

The Model 331E offers one and the Model 331S offers two proportional-integral-derivative (PID) control loops. A PID control algorithm calculates control output based on temperature setpoint and feedback from the control sensor. Wide tuning parameters accommodate most cryogenic cooling systems and many small high-temperature ovens. Control output is generated by a high-resolution digital-to-analog converter for smooth continuous control. The user can set the PID values or the Autotuning feature of the Model 331 can automate the tuning process.

Heater output for both the Model 331S and Model 331E is a well-regulated variable DC current source. Heater output is optically isolated from other circuits to reduce interference and ground loops. Heater output can provide up to 50 W of continuous power to a resistive heater load, and includes two lower ranges for systems with less cooling power. Heater output is short-circuit protected to prevent instrument damage if the heater load is accidentally shorted.

The setpoint ramp feature allows smooth continuous changes in setpoint and can also make the approach to a setpoint temperature more predictable. The zone feature can automatically change control parameter values for operation over a large temperature range. Values for ten different temperature zones can be loaded into the instrument, which will select the next appropriate value on setpoint change.

Interface features of the Model 331S and 331E

The Model 331 cryogenic temperature controller is available with both parallel (IEEE-488, 331S only) and serial (RS-232C) computer interfaces. In addition to data gathering, nearly every function of the instrument can be controlled via computer interface. Also included is a Model 330 command emulation mode that makes the Model 331 interchangeable with the older Model 330 in software-controlled systems.

Each input has a high and low alarm which offer latching and non-latching operation. The two relays on the Model 331S can be used in conjunction with the alarms to alert the operator of a fault condition or perform simple on-off control. Relays can be assigned independently to any alarm or be operated manually.

When not being used for temperature control, the loop 2 control output can be used as an analog voltage output. It can be configured to send a voltage proportional to temperature to a strip-chart recorder or data acquisition system. The user may select the scale and data sent to the output, including temperature, sensor units, or linear equation results. Under manual control, the analog voltage output can also serve as a voltage source for other applications.

Both versions of the Model 331 include a bright vacuum fluorescent display that simultaneously displays up to four readings. Display data includes input and source annunciators for each reading. All four display locations can be configured by the user. Data from either input may be assigned to any of the four locations; the user’s choice of temperature, sensor units, maximum, minimum, or linear equation results can be displayed. Heater range and control output as current or power can also be continuously displayed for immediate feedback on control operation.

Normal (default) display configuration
The display provides four reading locations. Readings from each input and the control setpoint can be expressed in any combination of temperature or sensor units, with heater output expressed as a percent of full scale current or power.

Curve entry
The Model 331 display offers the flexibility to support curve, SoftCal™, and zone entry. Curve entry may be performed accurately and to full resolution via the display and keypad as well as computer interface.

1The Lake Shore SoftCal™ algorithm for silicon diode and platinum RTD sensors is a good solution for applications requiring more accuracy than a standard sensor curve but not in need of traditional calibration. SoftCal uses the predictability of a standard curve to improve the accuracy of an individual sensor around a few known temperature reference points. Both versions of the Model 331 can generate SoftCal curves. 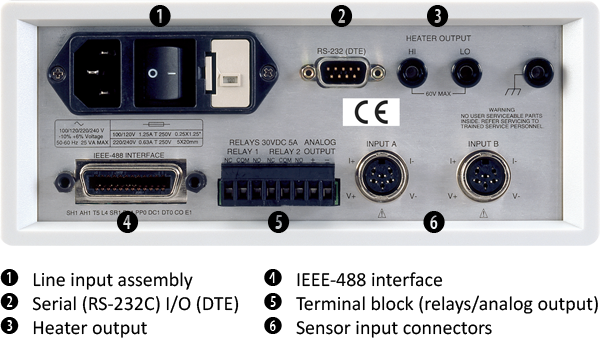