When autocomplete results are available use up and down arrows to review and enter to select.
HTMLPageTitle
​New terahertz material characterization system installed in Brown University lab
Unique CW-THz spectroscopy system to aid Mittleman Lab in materials research 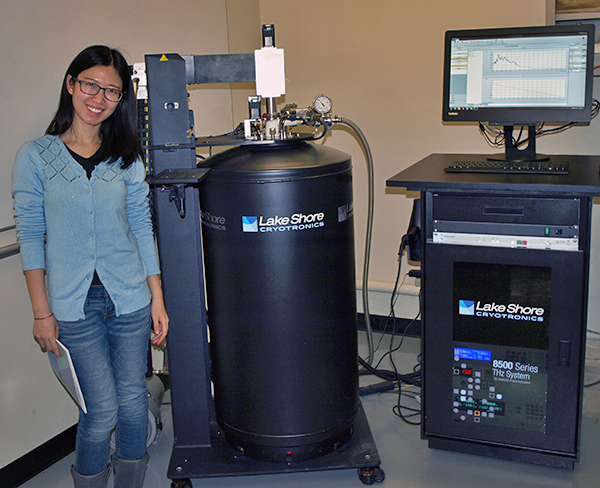 Brown University scientists exploring how frequencies within the terahertz band of the electromagnetic spectrum can advance spectroscopic studies of materials recently added a new tool to their research arsenal: a THz-frequency materials characterization system from Lake Shore Cryotronics.

Installed in the lab of Professor Dan Mittleman in early March by Lake Shore, the 8500 Series system will be used primarily to study THz-frequency magneto-optical responses of semimetals, iron-based superconductors and other novel materials.

Dr. Mittleman’s research interests involve the science and technology of terahertz radiation. He moved last year from Rice University to Brown to start up the world-class THz research facility in the university’s School of Engineering. Since his arrival in September, the Mittleman Lab has assembled an impressive array of equipment and staff to continue explorations in the THz regime, commonly considered “the last frontier” of the electromagnetic spectrum.

Researchers have long believed that THz analysis could reveal new and important properties of materials, and open new doors to further semiconductor and materials development. However, there was a need for affordable, reliable and easily operable measurement systems for the research community. The 8500 Series system from Lake Shore represents the first commercially available product to combine continuous wave (CW) THz spectroscopy and a high-field cryostat to create a reliable tool for researching the far infrared properties of new materials. No special knowledge of THz optics is required, and it enables non-contact material spectroscopic response measurements across a wide range of frequencies, temperatures and field strengths.

“We set out to accomplish something never done before—placing a CW-THz measurement inside a research cryostat so that samples can be analyzed spectroscopically at temperatures as low as 5 K,” Daughton explains. “It turns out this is a lot harder than it sounds because THz signals are very small, and everything has to be very stable and repeatable for the measurements to be meaningful. Slight variations in temperature, THz source power or background signals can be detrimental. It took a lot of work to sort it all out, but we are pleased with the final product and look forward to the research results it will enable.”

The delivery of its first production THz system to Brown was the culmination of more than four years of product development, beta site testing and refinement by Lake Shore and its partner institutions. Beginning in late 2011, Lake Shore worked closely with researchers at The Ohio State University, the University of Dayton, Wright State University, the University of Arizona, and the Air Force Research Lab to refine product concepts and perform early testing in a variety of material measurement applications.

Mittleman’s group will continue to spearhead research into new techniques for generating, manipulating and detecting terahertz radiation, with a goal of eventually opening a user facility to further support others working in this arena.

About Lake Shore Cryotronics, Inc.
Supporting advanced research since 1968, Lake Shore Cryotronics is a leading innovator in measurement and control solutions for materials characterization under extreme temperature and magnetic field conditions. In addition to precision materials characterizations systems that explore the electronic and magnetic properties of next-generation materials, high-performance product solutions from Lake Shore include cryogenic temperature sensors and instrumentation, magnetic test and measurement systems, and cryogenic probe stations. Lake Shore serves an international base of research customers at leading university, government and commercial research institutions, and is supported by a global network of sales and service facilities. For more information, visit www.lakeshore.com.

About the Mittleman Lab of Brown University
The Mittleman Lab in the School of Engineering at Brown University conducts research involving the science and technology of terahertz radiation with special expertise in terahertz technologies, laser science and ultrafast optics. Recent breakthroughs include the development of what is believed to be the first system for multiplexing terahertz waves, with possible future use in higher-bandwidth wi-fi and cellular networks, as well as a new type of artificial dielectric lens for the THz regime, which may prove useful in THz imaging or THz-wave device applications. For more information about the lab’s work, visitwww.brown.edu/research/labs/mittleman.

About TOPTICA Photonics AG
TOPTICA Photonics AG develops, manufactures, services and distributes technology-leading diode and fiber lasers and laser systems for scientific and industrial applications. Sales and service is offered worldwide through TOPTICA Germany and its subsidiary TOPTICA USA, as well as through 14 distributors. A key point of the company philosophy is the close cooperation between development and research to meet customers’ demanding requirements for sophisticated customized system solutions and their subsequent commercialization. Visit www.toptica.com for more information.